Let’s do this again !

This year’s Comic Con was just awesome !
Celebrating Marvel’s 80th birthday, I had the chance to meet Ryan Meinerding who was sitting in the artist alley. He shared some really cool insights about the costume-making for the cinematic universe. I was trying to keep it to myself, but the fangirling hit me hard.

I was enjoying the convention too much, so I forgot to take actual pictures… the cosplays were on point though, good atmosphere there, had lots of fun ! xoxox

I was seated first row during this panel and tried my best to record this interview / Q&A with Finn Jones, but I didn’t bring a tripod and my arms are weak so expect the video to be shaky. I zoomed it as much as possible for Finn Jones fans ! Hope you’ll appreciate the effort and watch the video down below, it was fun 🙂

Here’s a portrait with one of my fave cosplayers dressed as a burlesque Tinkerbell, last weekend when I was attending Comic Con Paris. 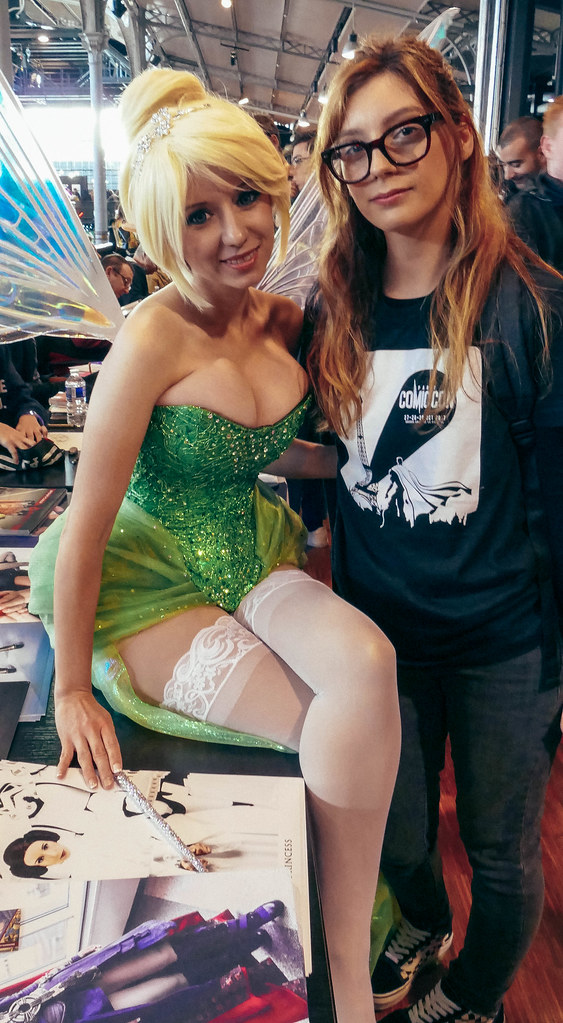 I met my favorite cosplayer 😀 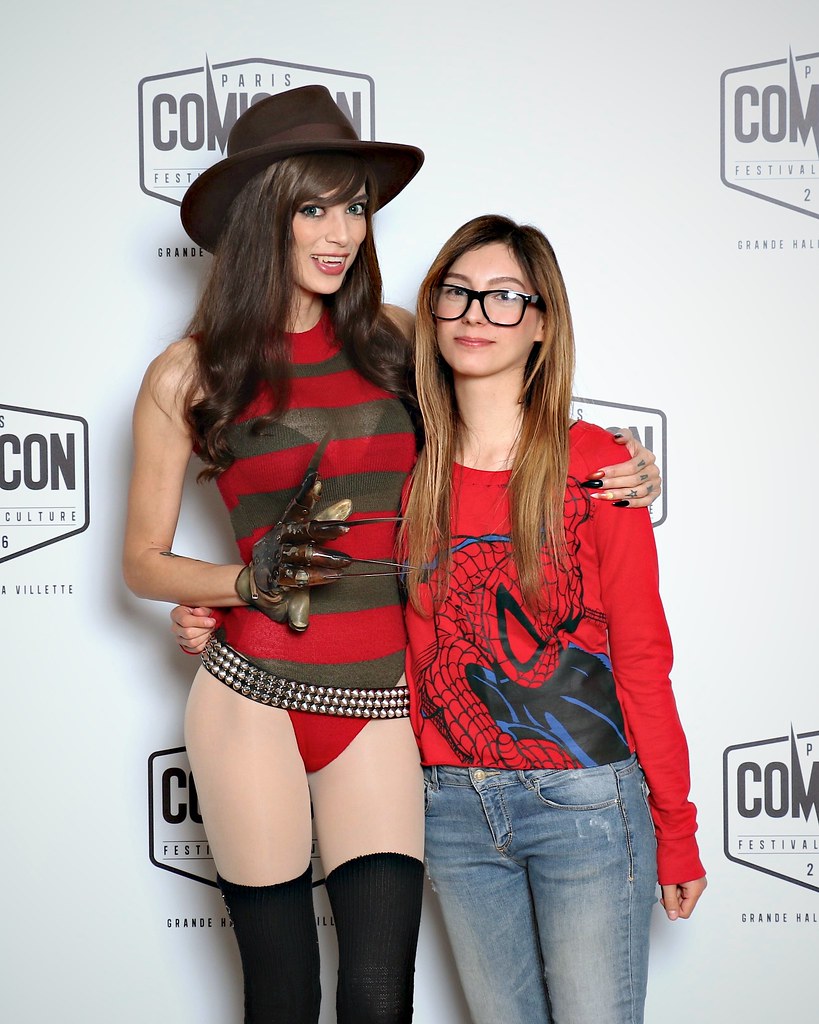 I’ve been wanting to meet LeeAnna Vamp forever ! She’s always been my number one, fave cosplayer out there… what do I like about her ? Her choices of cosplays are awesome, she looks incredible, she seems like such a nice person, and I dig the fangs… yeah, definitely THE FANGS are a winner here.

But seriously, on Friday 21st October I was at Paris Comic Con & because I was stressing out so much about not missing on the opportunity of seeing her in real life, and get to tell her how I think she’s cool and that she’s my favorite cosplayer, I got myself a photo-op ticket and it went super well; she was so sweet, she hugged me !

Her husband was also there, and I went to her booth later to get a couple posters (that I’ll hang in my bedroom), she signed them all plus the photo I got with her. She let me take a picture for the mag, that you can check below. We chatted just a tiny bit, because my heart was literally beating so fast – I have no idea what I even said… but it’s okay, at least I managed to express myself a minimum, and this was the best day ever !

Thank you LeeAnna Vamp if you’re reading this, you & your husband are such great people, it was incredible meeting you ! 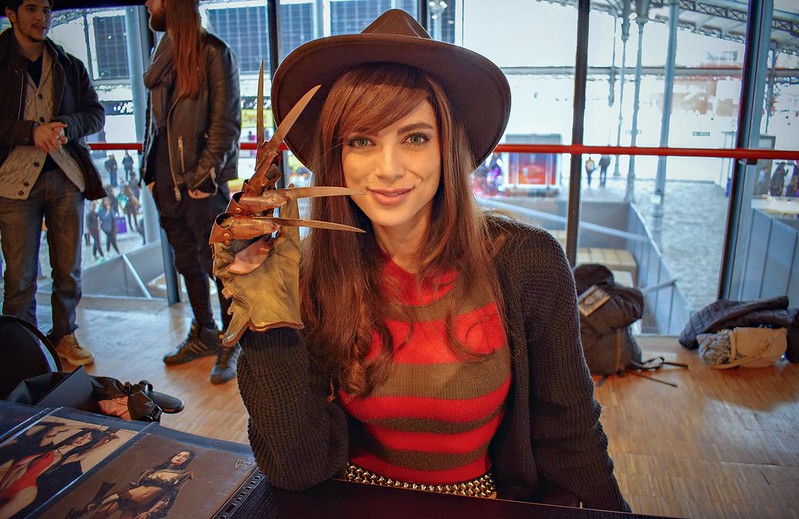 This year it was incredible ! I met some of my favorite actors & I was definitely starstruck… seeing them in real life was something 😀 They were all super nice, and entertaining during the panels, it was such a blast.

By the way yes, I’m in the red circle you will notice in the pictures 🙂

First panel of the day was with Eliza Dushku that I couldn’t believe I was seeing in front of me, with my own two eyes. She played Faith in Buffy the Vampire Slayer, & not many know this but that is my favorite TV series of all time. I idolize everything in the Buffyverse, I was so excited for this panel, it was unbelievable ! I was in geek heaven.

Second panel in the company of the freaking awesome Mike Colter aka LUKE CAGE !! Ah… haven’t expressed my love for this new Marvel show on the mag yet, but I will, because I absolutely loved it. This guy has such a deep and strong voice, and he does look impressive when you see him just like that, but he was so charming & friendly, he tried to shake as many hands he could when they told him it was time to exit the panel.

Last panel of the day was dedicated to the most popular show of our time, I’m naming Game of Thrones. Carice van Houten who portrays Melisandre the priestess, nicknamed “The Red Woman” was there. The Comic Con was honored she attended, since she gave birth to her first child in late August of this year, and offered her a children’s songbook of famous french songs. Unfortunately her mouth remained zip-tied when the audience asked for a couple spoilers on the next season, which will be the 7th.

The only thing we got out of our pressing questions, is that William Simpson who is a comic artist that draws the storyboards for Game of Thrones, already knows what’s going to happen in season 7 UP ‘TILL THE VERY END OF IT !! So… if you want to harass someone for spoilers, it’s him ! Let me tell you that our mind just blew away when he admitted that on the panel, I was like “gosh, why… !!! I need answers !!”

That was on Friday 21st October, and as you can tell, my day was full of amazing surprises and just perfect. This was the best Comic Con they made in France, and I’ve been to many, so congratulation to the squad who took care of all things.

Flashback to Long Beach Comic Con last year, when my sister & I saw Xander in real life and were completely star stuck !

WELCOME TO MY MAG !

When I created this space, the idea was to share my passion about the geek culture. My sister & I are thrilled to be the team running the operations of what has become an awesome experience, that allows us to live our dorky dreams ! Join our adventures by staying tuned xoxox

I'm my sister's favorite sidekick, that's why I'm usually there for the crazy ventures. I follow her ideas in spite of always being unconventional and definitively, out of control. Let's put it this way : I'm what keeps her to a minimum of sanity, and this magazine out of trouble... I love my job :)